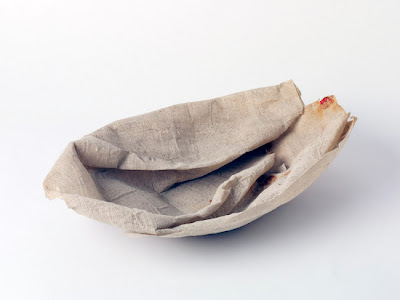 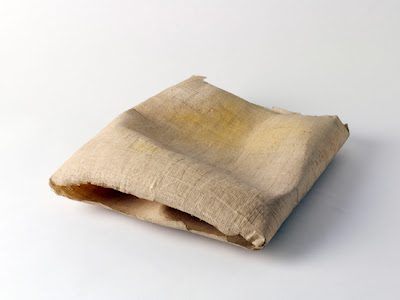 “…a series of small sculptures by Eva Hesse that are essentially fragments rescued from her studio. They are fragile and diaphanous in substance, almost anti-sculptures.

A year before her death, in 1969, Hesse wrote of her desire “to get to non-art, non-connotive, non-anthropomorphic, non-geometric, non-nothing; everything… It’s not the new, it is what is yet not known, thought, seen, touched; but really what is not and that is.” Though not quite there, or not quite anything, the works, nonetheless, feel significant and demanding. As Leslie Camhi wrote for the New York Times blog, though the work in the exhibition seem closer to prototypes to autonomous works of art, they are compelling in revealing those familiarly Hesse-ian themes: “plasticity, an engagement with ephemeral materials, the elusive and incomplete nature of memory, and a redolent corporeality.”


The notion of "peeling back", of taking away in order to expose, of getting to the essence and attempting to reveal the essence alone, asks for an ongoing exploration. It is also what very much draws me to Eva Hesse's work. Beauty of the object becomes consequential. I really love these pieces..